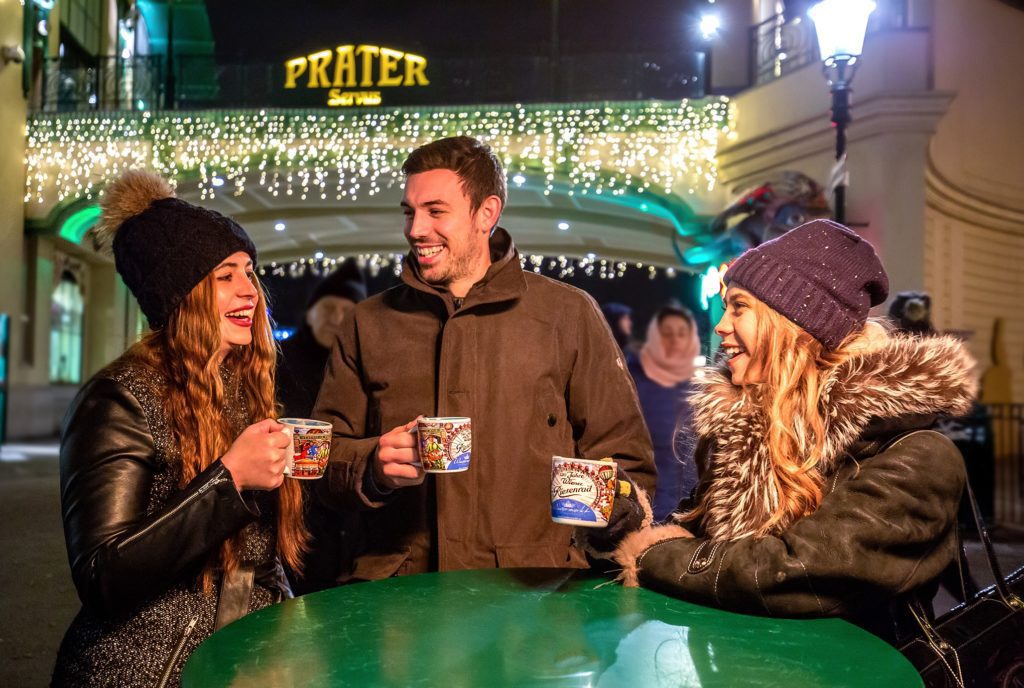 Are your thoughts drifting towards the wonderful holiday treats we make, enjoy and share at this
time of year? No matter if you celebrate Kwanza, Hanukah or Christmas, each of those holiday
traditions offers wonderful and unique food and drink experiences.
Below I’d like to share some of those Christmas foods and drinks that I have enjoyed from North
America, Latin America, Europe and Oceania.

The bûche de noël, which originated in France, is known as the Yule log in the UK. It is a long
cake with cream filling shaped like a log. There are many variations on flavours, from plain white
cream to raspberry or orange sauce, and even mint flavour in the UK. Variations on this are seen
in Spain and other European countries as well. The origin of the French bûche dates back to
pagan times when wood logs were burned in home hearths. Over time, hearths disappeared, to
be replaced by wood-burning stoves. The inspiration for the sweet dessert came from the smaller
logs that were burned on the wood-burning stoves. 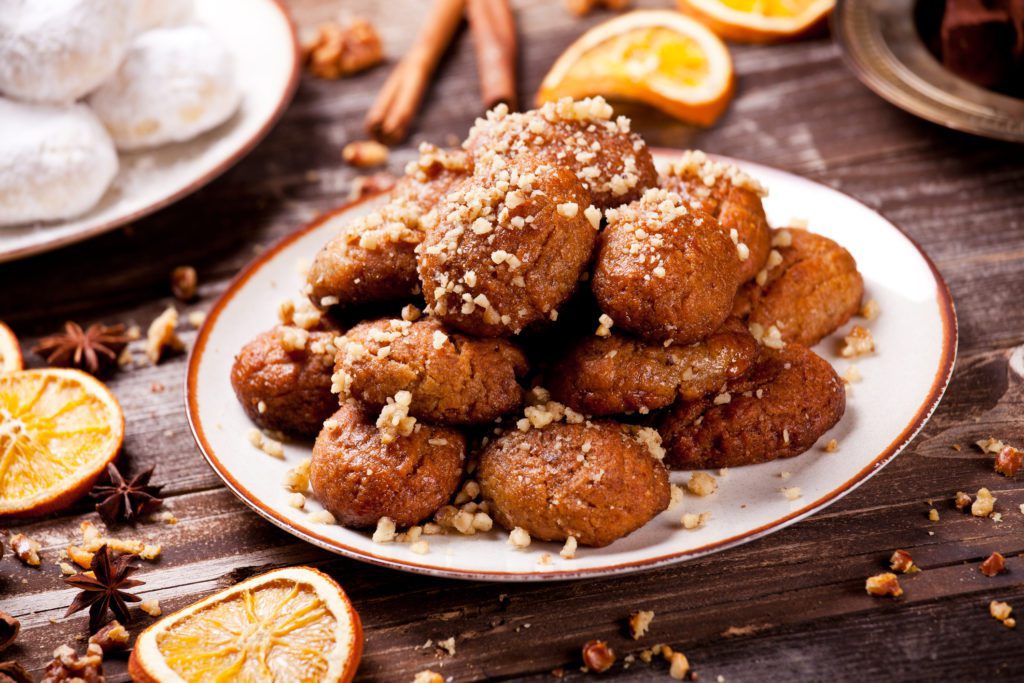 When you start to see these cookies in bakeries across Greece, you know that Christmas is
around the corner. These circle or oval cookies are flavoured with cloves, orange and cinnamon
and usually dipped in a syrup before being sprinkled with chopped pistachios. The sweet
originates in the times of ancient Greece when a version of it was offered to the gods at funerals. 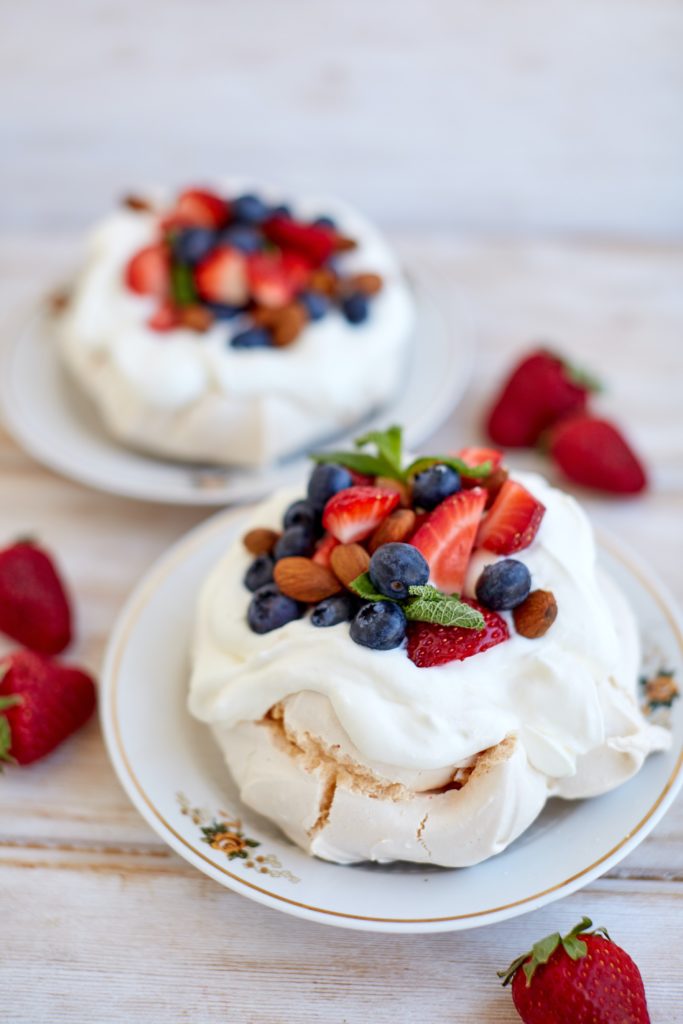 As the discussion goes with Lamington cakes, there is a lot of back and forth among the Kiwis
and Aussies as to which country invented pavlova, which is made of meringue and chopped fruit
like strawberries and blueberries. Since Christmas down under is during the summer, this is a
refreshing holiday treat for the warmer weather. The dessert was named after the famed Russian
ballerina Anna Pavlova, who toured Australia and New Zealand in 1926. 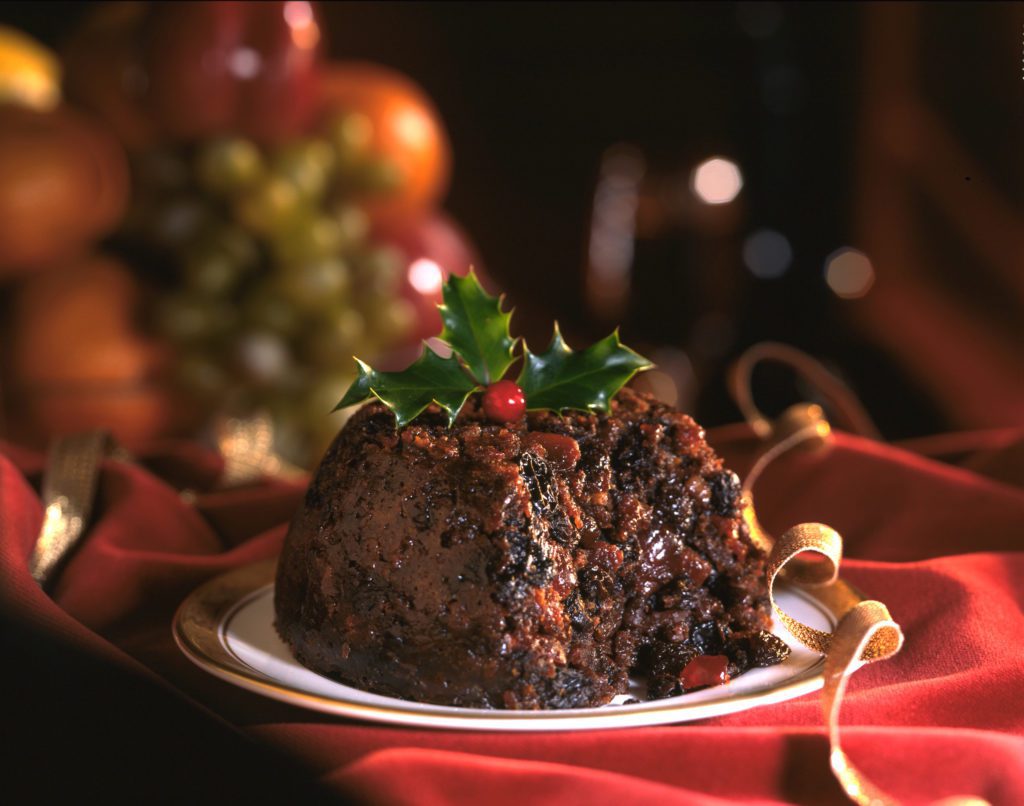 Christmas pudding dates back to English medieval times when it was made with meat and
vegetables. After some time, candied fruits were added.
The Puritans banned Christmas pudding because it was considered to be too joyous for holiday
merriment. Despite this, the tradition spread around the world with the British Empire and now
Canada, Australia, New Zealand, South Africa and many formerly British owned islands look
forward to the food every Christmastime.

Risgrynsgröt is also known as rice pudding, which is a popular dessert in the UK as well as
several Spanish-speaking countries. In Sweden, however, the dish is also known as Santa’s
porridge and includes milk and cinnamon, and sometimes raisins. A Swedish tradition is to put
an almond in the centre of one of the pudding dishes and, so the story goes, whoever finds the
almond will marry in the coming year. The dish dates back to 1542 and over the years, it has
been made not just with rice, but oats and even barley. Variations were abundant, sometimes
served with golden syrup, other times with dried fruits. The ingredients of Risgrynsgröt that
Swedes enjoy today became the predominant version in the 20 th century. 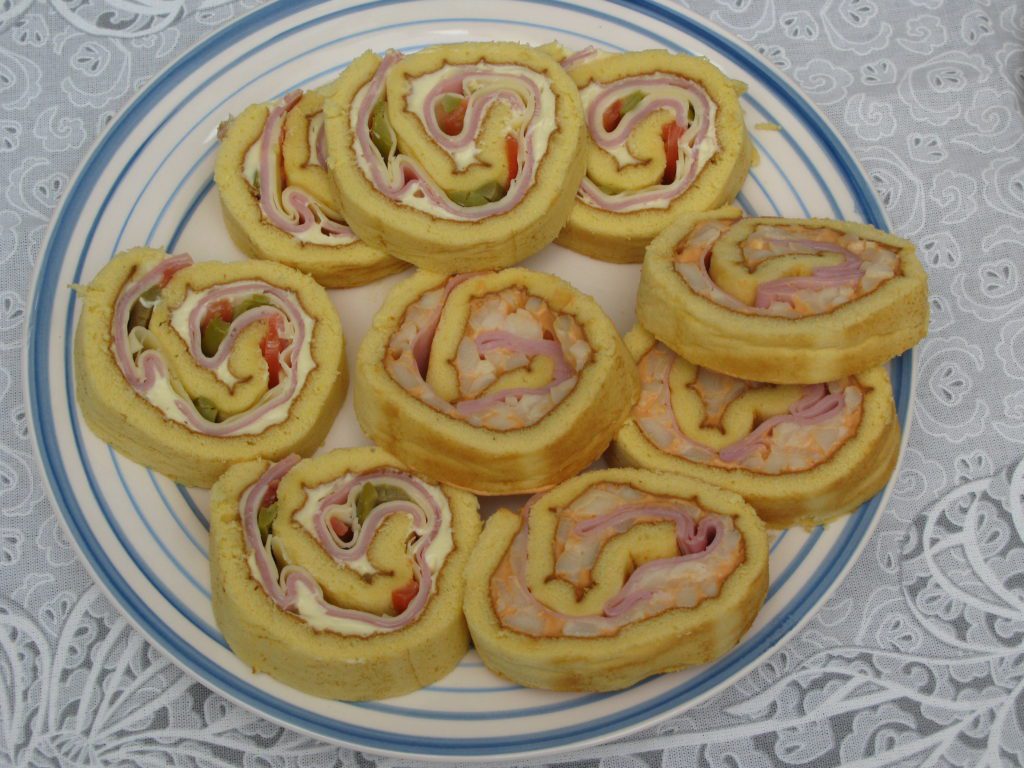 Imagine a sponge cake that you might expect to be filled with creamy, sweet goodness. Well, in
Argentina, they take that same sponge cake and fill it with savoury meats and vegetables like
artichokes, olives and tomatoes. It is served usually with mayonnaise, sometimes ketchup. At
least, that is what Argentines do during the Christmas holidays. At other times, pionono is served
either plain or with cream or dulce de leche. 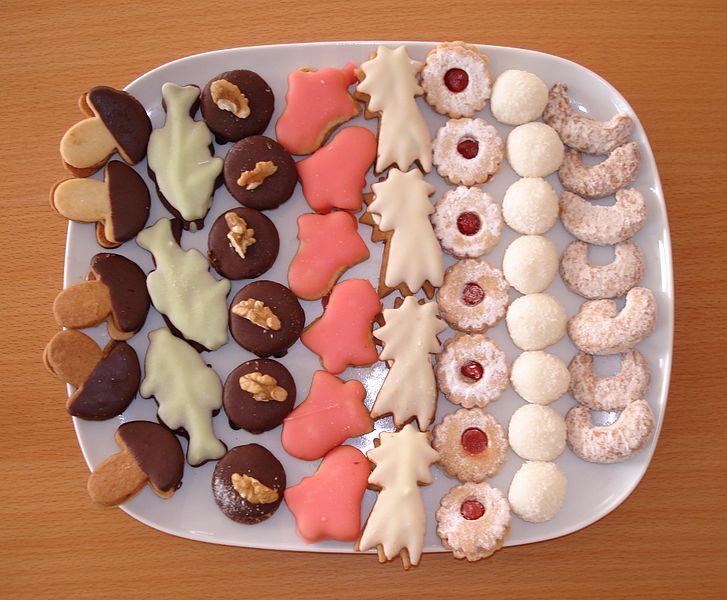 Many of us have enjoyed these tasty holiday cookies, but not known where they originated.
These cookies can contain jam, marzipan, white or milk chocolate, nuts, rum or more (not
altogether of course). The butter cookies are often baked in the shape of Christmas themes like
stars, bells and trees. Some versions of the treat are in the shape of balls. Thanks to our friends
from the Czech Republic for this tasty legacy. 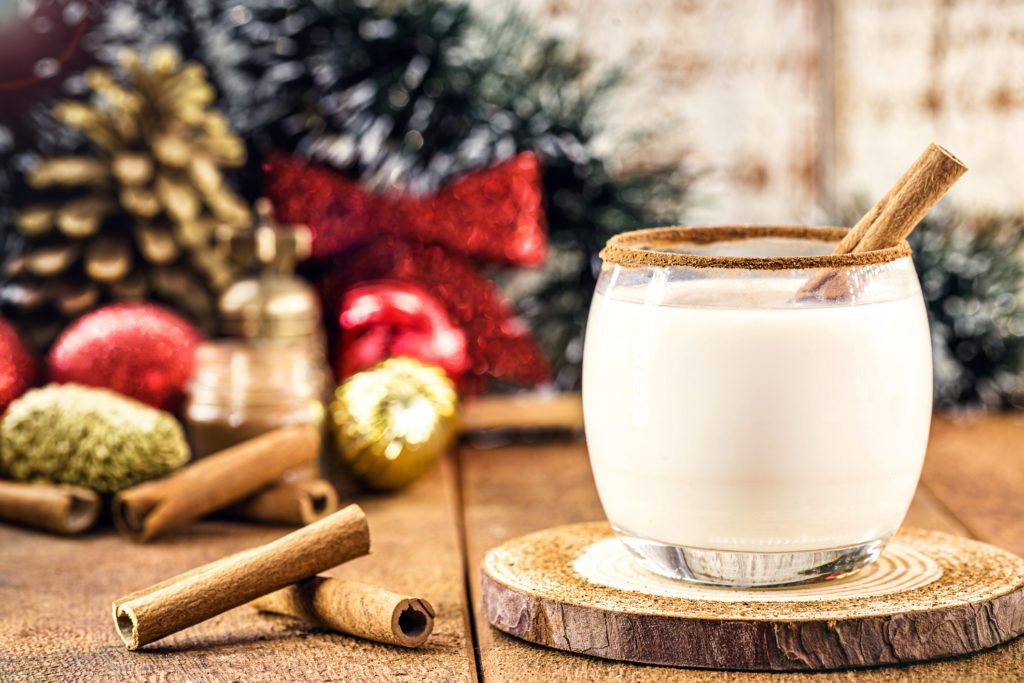 hot eggnog typical of Christmas, made at home all over the world, based on eggs and alcohol. called eggnog, Auld Man's milk, milk and pisco, momo cola, coquito or Crème de Vie or Eierlikör

While the Brits and Americans love their eggnog, in Latin America a similar drink is known as
coquito, which is made with spiced rum instead of the cognac used in the English-speaking
countries. In Ecuador, a version of this made with sugar-cane alcohol (aguardiente) and is called
canelazo. There is also crema de vie, a similar drink in Cuba. The coquito is said to have
originated on Puerto Rico, but beyond that, it’s unclear whether it was a legacy of Spanish or
American colonization.

This sweet custard is found everywhere in Colombia during the holidays. It is usually served
with cinnamon dusted on top, and sometimes also with buñuelos (kind of like fried donut holes).
Sweet and utterly delicious. Originally from Spain, the Colombian version does not have any
eggs, and can include prunes, raisins, chocolate or coconut.

Seen in Spain around the holidays, turrones look like blocks of chocolate, but are actually made
of nougat and other ingredients like nuts and fruits. The most common ones are chocolate based
but there are white ones too. There are as many different kinds of turrones as there are towns in
Spain! The sweet is a legacy of the Moorish invasion of Spain 1000 years ago.

Mulled wine is found largely throughout northern and eastern Europe and is extremely easy to
find in Germany and Austria. Glühwein is made from a base of red wine that has been simmered
with sweet spices like clove, orange and cinnamon. Left to cool slightly before serving, it is a
perfect drink to sip at a Christmas Market or around the Christmas tree, reminiscing with friends
and family about the year past. The name translates loosely to “glow wine” which is a reference
to the red-hot irons that would have been used to heat the wine. It dates back to 1420. 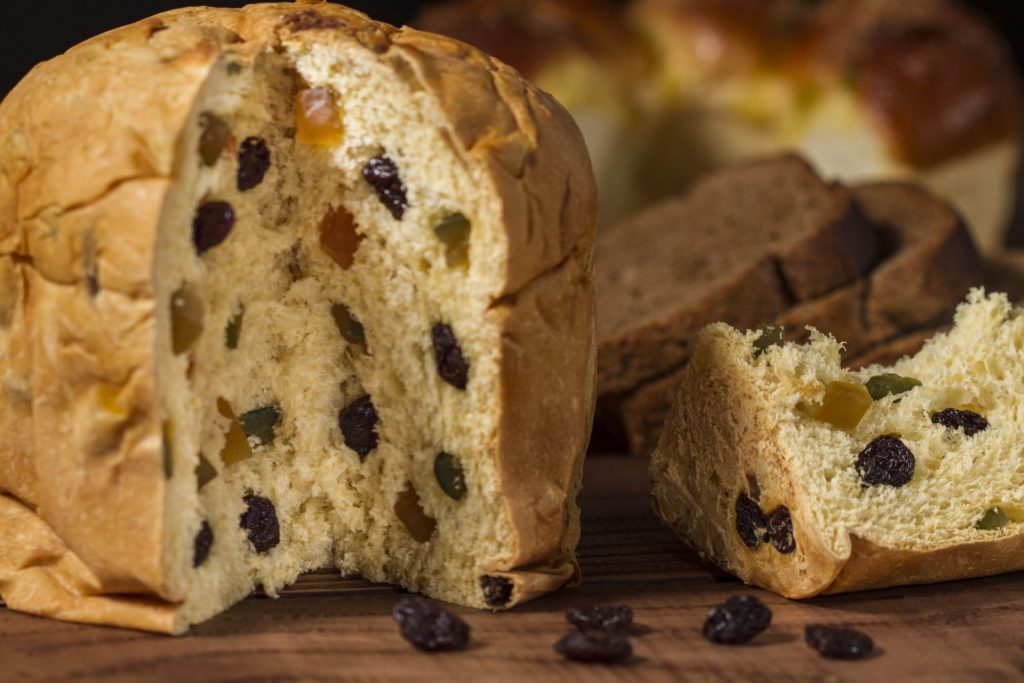 Many food lovers have heard of this Italian sweet bread, but do you know how many flavours it
comes in? The traditional one has dried fruits, but try it with chocolate chips, pumpkin, Amaretto
or even pineapple. The origins of the bread date back as far as ancient Rome, but most Italians
are more familiar with the origin story dating back to 1494 in Milan of a young man who wanted
to impress the Duke for his blessing of marriage across classes. Enjoy it as a dessert after your
evening meal, or with a cup of coffee or tea in the afternoon.
Happy Holidays! 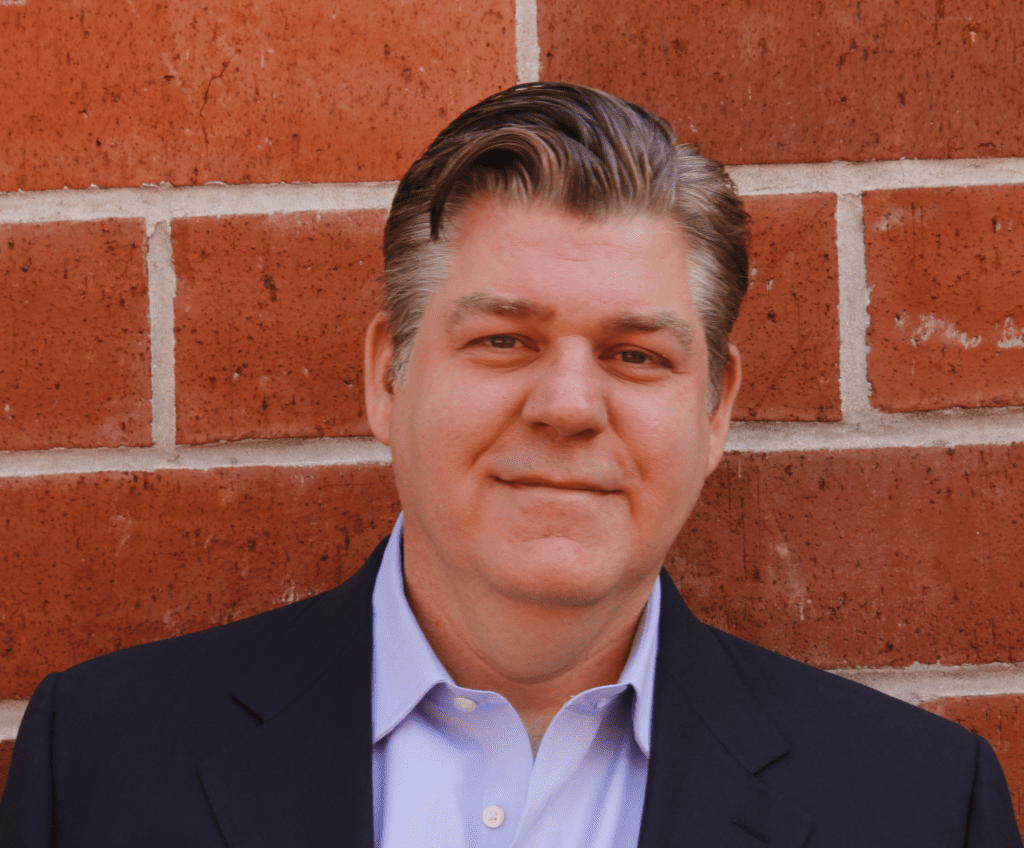 ERIK WOLF, MA, CCTP, MCTP is recognized as the founder of the modern food tourism industry and the World Food Travel Association. He is a highly-sought speaker, thought leader, strategist and consultant, in the US, UK and abroad, on food and drink tourism issues, and has been featured in The New York Times, Newsweek and Forbes, and on CNN, Sky TV, the BBC, the Australian Broadcasting Corporation, PeterGreenberg.com, and other leading media outlets. He advises leading global brands such as World Travel Market, Absolut, American Express, Disney, Marriott and Royal Caribbean, and organizations such as UNESCO and UNWTO. His articles, research and books have been translated into dozens of languages.

Follow us on:
Copyright 2021 all rights reserved. Web Design and development by Digibound